Day 2 of the Global Citizenship Project began at an early 730am at Charles Tupper Secondary as us facilitators began our preparations for the day!

I was particularly excited for the theme of the day, focusing on migration stories and experiences.

Talking migration, names, oral histories, & @UBCACAM with students at Tupper secondary. It's going to be a good day! pic.twitter.com/wGIbmOxQRS

I was also extremely elated that Fred Wah was the opening keynote for the day.

I’ll try to explain, as I did to Fred, how meaningful his text Diamond Grill was for me, as the gateway to Asian Canadian topics that would later intersect in both my academic and personal pursuits. So yes, I was fangirling because the Fred Wah was speaking to students about identity politics as an individual who felt he neither fully encompassed his Chinese or Anglo roots, and was/ is constantly judged for it. He read poetry from Diamond Grill  and I sat in the audience with my own copy of the text, following along and reminding myself of my annotated thoughts that I had left in the book from studying it in first year.

As I'm following along in my own Diamond Grill, chuckling as Fred chooses not to include the cuss words because high school students 😅

Fred Wah re: THE kitchen door: "The door became for me a metaphor. When we move through the door we move from one side to another"

As someone who constantly is trying to negotiate an everyday identity and name crisis, is in love with food and migration storytelling, I couldn’t help but gush at the opportunity to tell all these things to Fred… That reading his seminal text made me feel less isolated in my politics as a fellow hyphenated individual.

Wah: "standing in the doorway means you can be in the way or meet others. It's a rife place to be & how I sometimes felt abt Chinese CDN ID"

Anyway, it was incredible to chat with Fred Wah, a local Asian Canadian celebrity & pioneer. Even still a week later since meeting him, I’m elated to share this particular meaningful interaction!

Diamond Grill was my gateway. Gushing about the hyphen, identity & language politics with Fred Wah IRL.. then this pic.twitter.com/jqqF2YPneb

I could and would have gone on, but it was time to meet with the students! Meanwhile, back in the library… 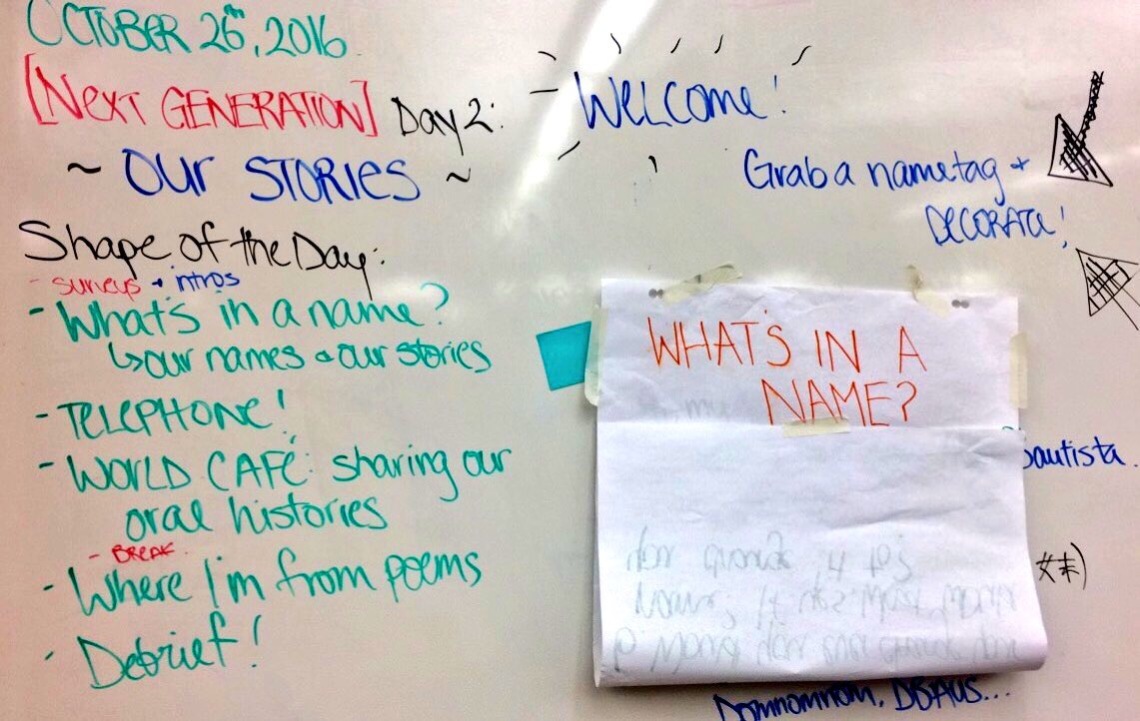 The morning workshop involved students sharing the stories behind them names. Names are always an important starting point for mutual understanding and dialogue, particularly being able to pronounce or call an individual by the name that they most identify with. Pronouns as well. I always love the reactions on peoples’ faces when I tell them my name story. My Western name, being 32 letters long and 4 parts, always begs the ‘where are you from’ question. And I’ve gotten to a place now where I don’t mind sharing the story, because as uncommon as it seems, the story of migration and name changes is actually a lot more common than folks would think! If we just listened a little harder, or even allowed these stories to come to a fore, I promise there’s a lot we can learn about migration patterns and settlement just from names. But I digress…!

Students had an opportunity to share their previous take home assignments of oral history interviews. It was fascinating to sit in and listen on the ‘world cafes’ where students shared bits of meaningful and surprising moments from their interviews. At the end of the session, students shared that they enjoyed learning more about where their peers’ families came from, remarking that majority of them are immigrants and may have faced the same experiences.

My academic and personal passions have always been around storytelling, and so an opportunity to share and learn with high school students about this topic was extremely exciting!  And, the perfect opportunity to share about my formative experiences with UBC’s Asian Canadian & Asian Migration studies program.

The afternoon’s elective workshop was about the impact of migration on families. As much as we’d think it, migration is beyond just an individual act of being. Having worked with Tupper students in the past with the Kababayan Academic Mentorship Program, I knew that the school had a high demographic of Filipino students, specifically those who had recently migrated and were transitioning into life in Vancouver – socially, academically, and all the in-betweens! I was curious about the insights students would share from their own lived experiences.

We identified and brainstormed push & pull factors,  played Move Your Butt (and realized that there were a lot of commonalities!), and migration bingo (and found out one student is a Metis descendant).

We compared life before moving to Canada and life after, identifying challenges and opportunities that impacted both the individual and families. Work. School. Friendship. Relationships. Family. Safety. Freedom. All these remarks came out in the discussion. The kids know.

We closed with a lovely video from Buzzfeed documenting what children of immigrants recognized their parents sacrificed for them. “Buzzfeed videos normally make me laugh but this made me thankful for my parents.” “I felt like I shouldn’t be embarrassed about my parents. “I am grateful for the sacrifices my parents made for me.”


With the sentimental feels leftover, students left me some feedback about the workshop and the realization that migration has all sorts of impacts on more than just the individual. Being a child of an immigrant myself and sharing my own experiences growing up in a different context than which my parents did, there were murmurs of agreement of similar experiences and sentiments. This intergenerational piece, the impact of migration of familial relationships still strikes a chord about my own relationship with my parents and the sacrifices they made when they migrated to Vancouver.

And with that, Day 2 wrapped! 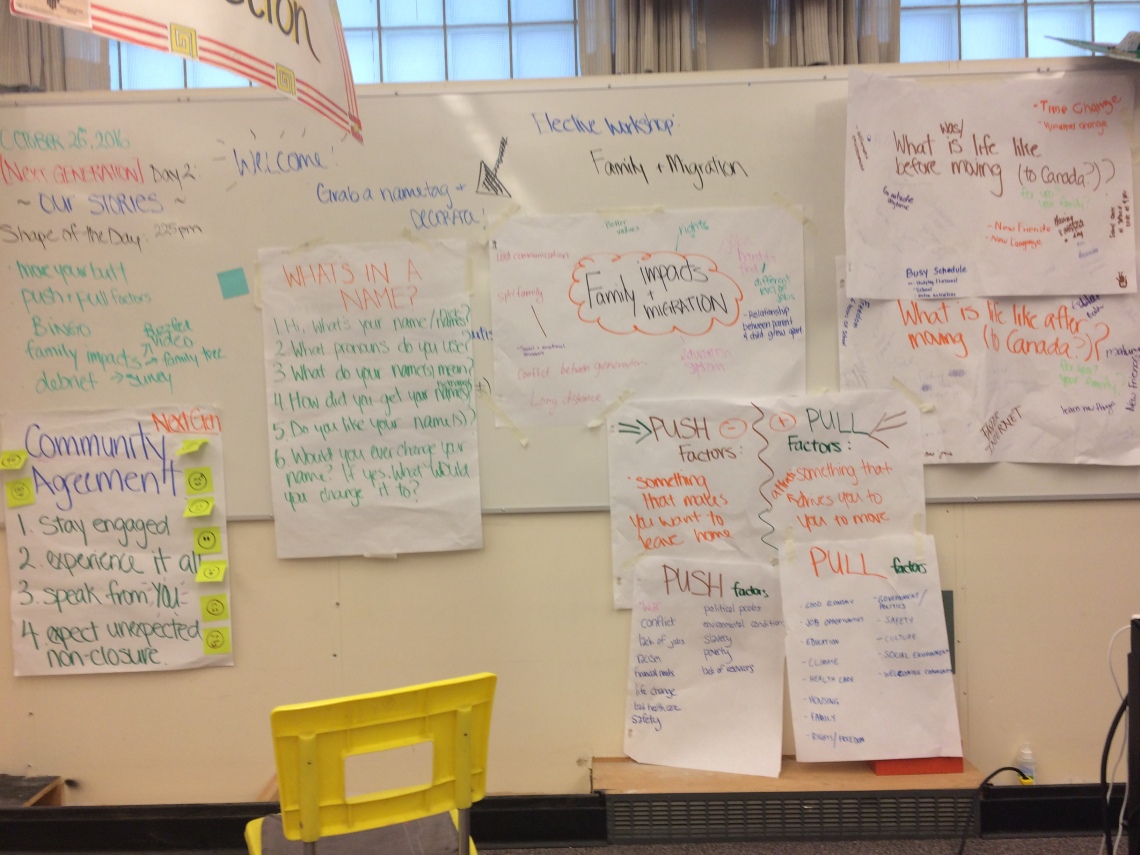 View all posts by _dbautista