Day 4 was the last instructional day with  students for the Next Gen project. The topic for the conference day focused on Global Citizenship. We spent some time trying to unpack this common phrase.. what exactly does ‘global citizenship’ mean? What does it mean to be a global citizen? It came as no surprise that students all had different interpretations, and why not! Everyone has a different understanding of what citizenship means, or how they interact in the world with each other. As an extension, students were introduced to the UN’s Sustainability Goals for global context of ideals for the future. 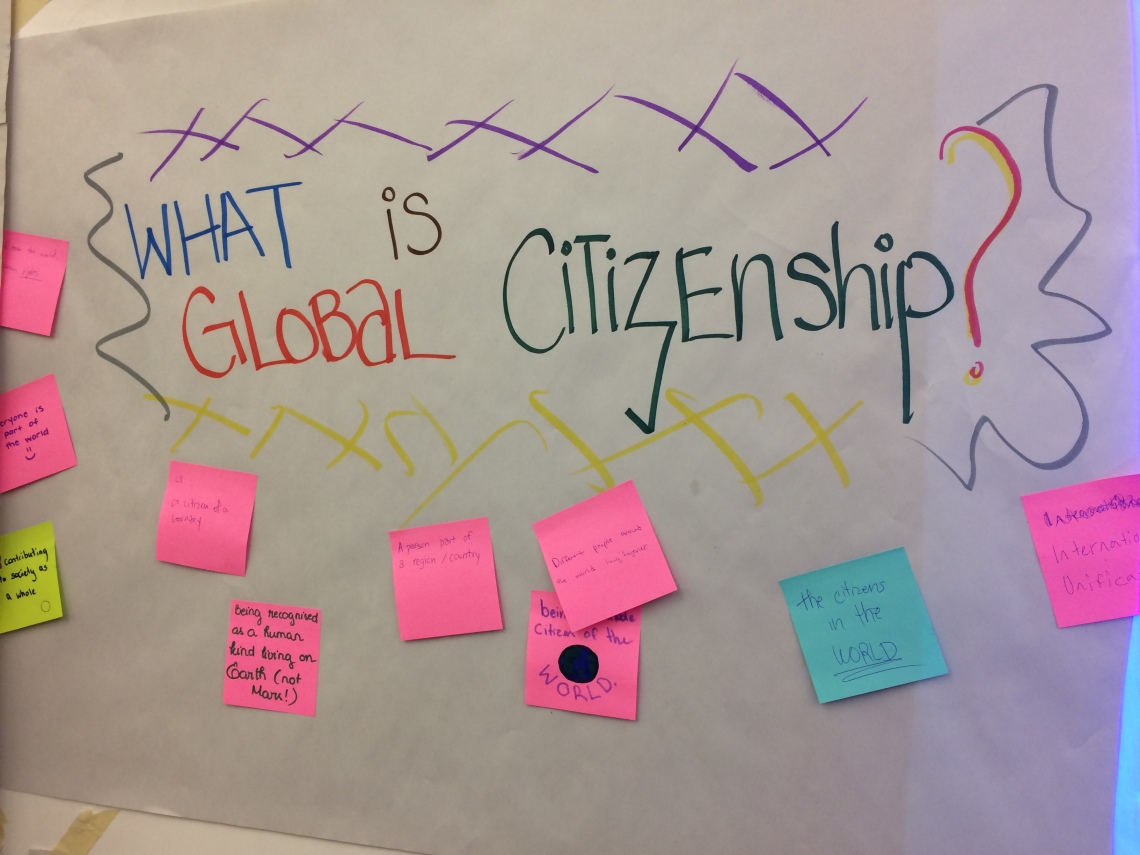 We also spent some time learning more about communication and how humans are able to express majority of their thoughts/ emotions through non-verbal cues. We chatted about empathy and sympathy when discussing issues that happen around the world VS a local context. How do we feel connected to issues we’ve never experienced? How can we offer allyship or support in these instances? 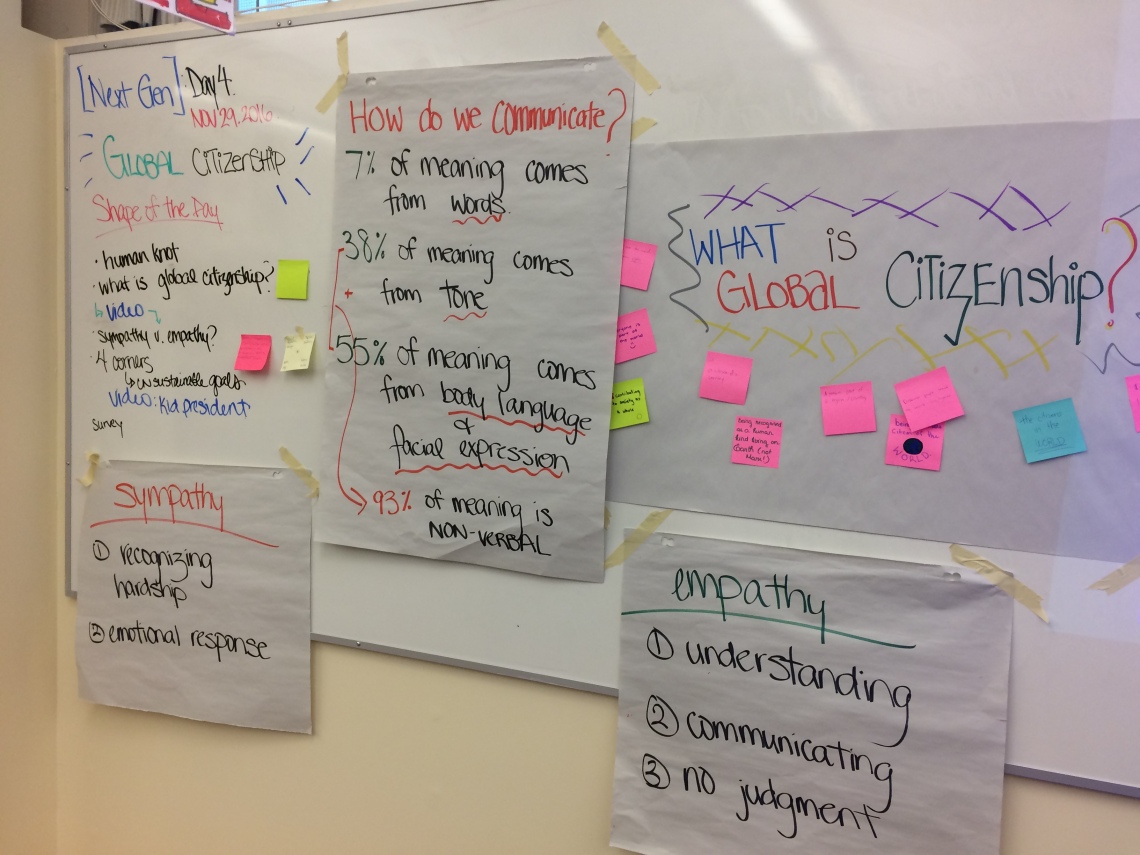 Students spent majority of their class time getting prepared for the youth summit (December 10). They were to create a poster, pamphlet, powerpoint, creative project, and presentation for the 10th. That’s a lot of work! Students had been working towards at Community Service Project (CSP) focused on the $18 Welfare Food Challenge. In fact, the class participated in meal planning for a week to try to imagine how they would be able to sustain a week’s worth of meals with $18 funds.And it was challenging. Students observed issues around eating healthily vs eating to try to/ be/feel full. Many of the cheaper food options included fast food, which often contains less favourable healthy options for consumers. To take the challenge an extra step, students also considered how folks who are on welfare fare if they have $18 to sustain their weekly diet that was accustom to culturally specific foods. Imagine a recently immigrated Syrian family who, on top of acclimatizing to their new space in Vancouver (school, work, social services, childcare, language supports, transportation, etc) would also need to consider how their palates would acclimatize too! Often, it’s the tastes and smells of foods that bring us home, make us feel at bay. It’s the memories evokes from the smell of a dish prepared simply that reminds an individual of their grandma’s cooking from childhood, or a family recipe passed down. Surprisingly, these simple things  can be overlooked, but even in the economics of poverty and health well-being, culture and the personal matter.

Our class created an information pamphlet and poster board documenting their research about the welfare rates in BC, welfare services, and the food challenge. They included photos and some of the meal planning calendars that students filled out. Students also wrote a letter to their MLA, Don Davies, advocating for raising the welfare rates in BC based on their student experience in mock participating in the Welfare Food Challenge. On Friday December 9, students had an opportunity to present their community service project to the other classes participating in the Next Generation project through the Youth Summit.

Plenty of projects to hear from the different groups, including the following:

The day began with an opening keynote from MLA Jenny Kwan who shared about her humble beginnings from being part of an immigrant family, growing up in East Vancouver, her passions for advocacy in the community and all the experiences in between that led her to do the work she does now. She very enthusiastically told students that they have the potential to be great leaders in whatever capacity that leadership takes form in. Jenny stayed on to be a part of the Youth Summit panel that would give feedback to each of the presentation groups. She joined the panel including Mosaic ED, Bernie Faber, Tupper’s principal and vp, one of the project facilitators (on rotation), and Mr. Lum, the students’ social studies teacher who tirelessly worked hard to coordinate the entire Mosaic project at Tupper!

Feeling like a proud mom watching the class present their research findings, explain their project and their experience with the rest of the other Tupper students! A few of the boys also read out the letter they wrote to their MLA.

Afternoon performance from Kathara and Butterflies in Spirit. These creatives joined forces to express history and artistic coming together in celebration of Indigenous and Filipino culture. For more information about these groups, click here!

I should mention it was snowing fairly hard this day… both in Vancouver and Canadian standards! It was a little tricky to keep students’ attention because of the intense climate excitement! Unfortunately due to timing, the project came to an abrupt end when the school bell rang at 3pm and the facilitators didn’t all have an opportunity to do individual or group goodbyes with the students in their groups. And I wish we would have! Having completed 4 working sessions and this 5th day of celebration, much had changed since we walked into Tupper for the first time on October 19th. I learned so much as a facilitator (mind you, not teacher) of this project, and am still unravelling the different conversations I had with the students or witnessed amongst them. A lot of lived experiences shared and received so humbly. Curiosities peaked and questions still unanswered.

There is a distinction between being a workshop facilitator and a teacher. Coming into this project with a teacher background, I quickly realized this difference. This is no sage on the stage let the teacher talk at the front of the classroom to pupils expected to quietly listen and absorb with no dialogue. It’s the very opposite- learning together, having conversations as a group. It’s cultivating a community or safe space where difficult topics can begin to be unpacked. It’s an opportunity to share, listen, and reflect with no worry of there being a right or wrong answer, or being evaluated or tested. Perhaps my own reflections will come at a different time, but for now, I am left wondering how different our education systems would be if we took the time to take a page or two from a (youth) facilitation playbook that offers a more horizontal dialogue instead of a top down approach. And maybe that’s a lesson that doesn’t just apply to the education sphere, but to our systems in general. It’s a start. More to come.

View all posts by _dbautista